The Masquerade And the Rocketship 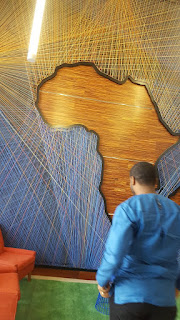 It was a little more than 2 years ago when I embarked on a new phase in my career by jumping aboard the blue rocketship. At the time little did I know what a ride I was letting myself in for. It's hard to believe that it's just been slightly more than 2 years given all that has happened.

So what has changed in that time?

Well before writing this post , i took a few minutes to read through my earlier post on the masquerade and it really felt good to see that all the evidence of the growth of the ecosystem that I listed at the time is not only still visible but has now been amplified.

But if you ask me what I feel the biggest change in the tech ecosystems of Africa and the Middle East (and perhaps even the world) has been in the last 2 years it is simply this:

If you are one of the people in the region who decided all those years ago to take a bet and stake your career and indeed your life on “computers” and “the internet” or whose extended family did not (and probably still do not) understand exactly what it is that you did/do. If you were ever continuously asked when you finally intend to get a “real job”. If you have ever been mistaken for a glorified typist or computer/phone repair person then you probably know what I mean.

In 2013 I longed for the day when people involved in tech would be accorded some real estate on the front pages of national dailies like their counterparts in other sectors and today it is a thing of joy that more people have realized that technology and this “computer thing” is really a catalyst for socio-economic growth to the point that tech is slowly making its way to the front pages.

To see what I mean, you can take a look at Jake Bright’s article on Techcrunch that gives a recap of some of the highlights in the African tech ecosystem.  The Middle East was not left out as we also saw a number of outcomes, the most notable of which was the acquisition of e-commerce powerhouse Souq by Amazon and the announcement by his royal highness Sheikh Mohammed bin Rashid launching a new initiative to help train one million young Arabs computer programming.

The world as well has not stood still in that time. In the last few years, we have seen a number of trends and buzzwords also become mainstream. Big data, machine learning, artificial intelligence, virtual reality, augmented reality, cryptocurrency and blockchain, the list goes on and on. Individuals and companies continue to invest in the search for the “next big thing”. As Mark Zuckerberg said in Lagos to a room full of builders, the surest way to predict the future is to create it.

Last year at Facebook , we placed our own bet on what we believe to be the next big thing when we announced our new mission which is “ To give people the power to build community and bring the world closer together ”. The mission clearly states where we will be investing our resources in the coming years:

If you think out about it, it's actually quite straightforward. When you invest in people, the benefits are immeasurable.

For someone like me who bet his career on the developer community from day one, to say that I am 100% aligned with this mission would be a massive understatement.

So it was with lots of excitement and a mix of emotions (you can ask Bilbo Baggins if you want to understand) that last December,  I accepted the opportunity to lead the team shaping Facebook’s global developer programs strategy. In this team we will spend every working day figuring out how best to leverage our scaled programs to support the global community of builders.

To my Middle East and Africa family, we are still together.

As always,  continued gratitude to my CEO and Chairman without whom this would remain a pipe dream.

And the journey is 1% finished.

In the meantime, enjoy this one from Davido