The Masquerade : On Evolution and Gratitude

There is a saying among the Igbos of Southeastern Nigeria that:


Which roughly translates into :


The great masquerade in this context refers to Sub Saharan African tech ecosystem.


After an amazing four years at Google, it appears that the time has come to observe this great masquerade from yet another vantage point.


Today is my last day at Google.


I will be moving on to commence other adventures that will hopefully position the ecosystem in Sub Saharan Africa to move on to the next stage in its evolution. 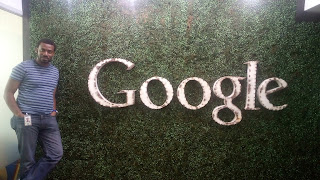 Looking back over the years at how much the tech ecosystem in Africa has grown in just 4 years. I am filled with nothing but immense gratitude to have played a part no matter how small (as part of the Emerging Markets Outreach team and then the Developer Ecosystems team) in working with people of all ages who decided to take their futures in their own hands and create the products and services that would enable more than a billion people leverage the internet as a platform for growth and enlightenment in Africa and other growth markets.


It has been an amazing ride. I have had the privilege of working in the company of some of the brightest and most passionate minds in the business both within and outside the company as they toiled day and night to better themselves, better their worlds and better the world.


In the last 4-6 years, we have seen the significant growth in the region and one can see evidence in so many forms e.g:


Even though things are nowhere near where they should be, I feel really grateful to be alive at a time when so much is happening and to just be able to witness it all.


Huge thanks go out to the developer community for all the support that you all continue to give me. Working with you remains the highest of many highlights of the last four years. As I move on to the next stage in my career , I move with the full confidence that the future of the developer community in the region is getting brighter by the day with continued collaboration from Google and other tech giants.


To Larry, Sergey, Sundar and my soon to be ex colleagues at Google, I can only say “Thank you” (the most under valued phrase in the English language). Google took a bet on Africa at a time when many similar silicon valley internet companies could not locate Nairobi or Lagos on a map (without Google), a lot of the growth signals I highlighted above can be linked directly or indirectly to this bet.
Not a month goes by that I do not get asked the following question :


“I saw that movie, ‘The Interns’, is Google really that awesome?”


to which my reply is something along the lines of:


First : Spending more time with family (my CEO and Chairman of the board)….
Then: Trying to catch up with the big masquerade but this time from another vantage point, there is still a lot to be done with regards the tech ecosystem and I am just grateful to be alive and part of it all


Until my next transmission:
Enjoy this short one from Sound Sultan
Posted by blonks at 2:50 PM